Edge of the Empire: Shadows of a Black Sun 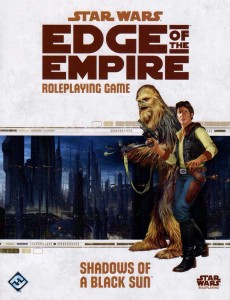 A dangerous bounty hunter is hiding amongst the populace of Coruscant, the capitol of the Empire. Over the gripping three-part adventure in Shadows of a Black Sun, the Player Characters will gather information on their target, track him through the streets of a bustling city, and (with luck and skill) face off against him in a final, deadly confrontation. But when faced with such a dangerous and highly trained target, will you remain the hunter…or become the prey?

Shadows of a Black Sun, a free introduction to Star Wars: Edge of the Empire, includes a full adventure, four pre-generated characters, and a set of basic rules to help players and Game Masters become familiar with game’s core mechanics.