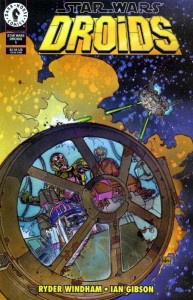 Olag Greck is a con man and arch criminal, and he’s hiding out exactly where you might expect: among his own, wretched kind on the smuggler planet Nar Shaddaa. But knowing where he is and actually arresting him are two completely different matters as the newly-deputized Artoo-Detoo and See-Threepio discover. Smugglers and criminals have no affection for old droids, particularly when they’re carrying badges! They’re just a couple of used appliances in hot pursuit of a perp, and a world of accomplices stand in their way!