The Clone Wars: Defenders of the Lost Temple 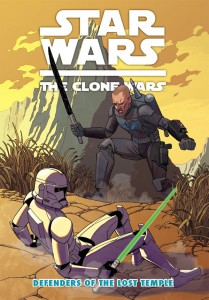 On a mission with a Jedi general, one trooper contemplates his own worth as a clone of the great Mandalorian warrior Jango Fett. As mission leads through a booby-trapped, abandoned Jedi Temple, this one clone will discover who he is and also where he came from when the Mandalorian Death Watch suddenly appears!