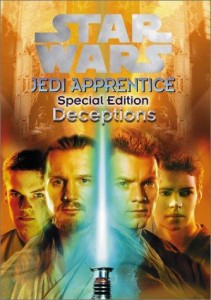 As an apprentice, Obi-Wan Kenobi is blamed for the death of another Jedi student. With the help of his Master, Qui-Gon Jinn, Obi-Wan must fight to clear his name. But even if he is found not guilty, he has gained an enemy for life—the dead boy’s vindictive father.

Twelve years later, Obi-Wan is a Jedi Knight, with his own young apprentice, Anakin Skywalker. Anakin doesn’t know about the secrets Obi-Wan is hiding. But as the past comes back to attack them, Obi-Wan and Anakin must fight deception with truth—and face off against enemies both new and old.