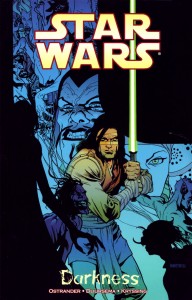 Despite his successful completion of previous missions, the Jedi Council still feels that Quinlan Vos, a troubled Jedi struggling to regain stability after having his memory erased, walks dangerously close to the dark side. But when a prison planet under watch by the Guardians is attacked by an unidentified enemy, Quinlan Vos is specifically requested to investigate because of his Guardian ancestry. Fully-recovered, or not, Quin is off on another suicide mission! Collecting the four-issue story arc.