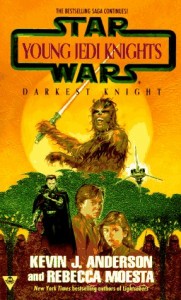 Jacen, Jaina Solo and their Wookiee companion Lowbacca travel to the Wookiee homeworld of Kashyyyk where Lowie’s younger sister Sirrakuk is about to undergo a Wookiee ritual. Since the ritual is dangerous, Lowie wants to assist his sibling.

However, the Dark Jedi Zekk has been assigned to lead a raid on Thikkiiana City, a major exporter of computer technology. By executing this mission, he will fulfill his great potential and win the title of the Darkest Knight of the Second Imperium. However, he must face his former friends Jacen and Jaina in the process…