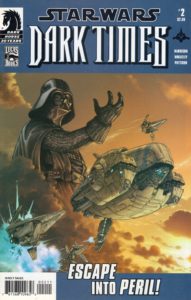 Despite his acceptance of the Sith ways, Darth Vader is shocked to find the Empire-and himself-complicit in an evil he thought he had put behind him . . .

A Separatist freedom fighter deals with the realization that the sacrifice made by his brothers-in-arms has been for nothing-and that their families are paying the price for their resistance.

The crew of a smuggler’s ship is forced to take sides in a conflict they have sought to avoid–and which has already changed the course of all their lives.

The dawn of the Empire plunges the galaxy into dark times, and every direction leads to danger!