Tales of the Jedi: Dark Lords of the Sith 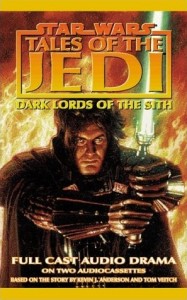 Ulic Qel-Droma and Nomi Sunrider and young Jedi Knights drawn into a battle for the survival of the Old Republic. But as the power of the evil Sith spreads across the galaxy, it threatens the existence of the Jedi themselves, and draws one of their greatest allies over to the dark side!