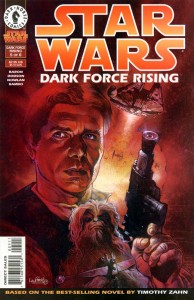 The Katana fleet, almost two hundred Dreadnaught heavy cruisers, were lost to hyperspace in the days of the Old Republic. Now the Empire wants the cruisers so they can regain power. The New Republic wants the ships to crush the Empire for good. And Talon Karrde is the only man who knows where to find the lost fleet, which could either be an invitation to fortune . . . or a bargaining chip at his execution.