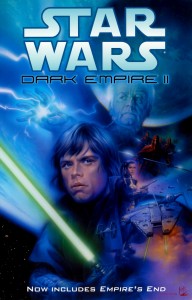 One of the most influential tales in the history of Star Wars, Dark Empire II gets a brand new edition that includes Empire’s End in the same volume for the first time!

With the Empire in retreat, Luke Skywalker undertakes a quest to rebuild the Jedi. Yet he has spent time as the Emperor’s thrall, and the taint of the Dark Side still lurks in his mind. When Palpatine unveils an insidious plan to conquer the galaxy using Han and Leia’s own children, will Luke be able to stop his one-time master?

Luke and Lando, Han and Leia, Threepio and Boba Fett-the gang’s all here in one of the most important stories of their lives!