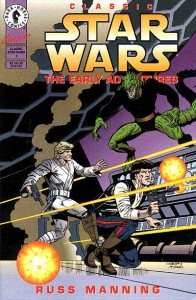 A peaceful scientist has created a device capable of turning a planetary wasteland into a paradise, but the Empire has exactly the opposite in mind! Luke Skywalker and Han Solo encounter the scientist’s stowaway daughter on board the Millennium Falcon, and before they know it, they are swept along in a desperate race to catch up with the climate-altering spaceship, which has left a trail of damaged planets in its wake!