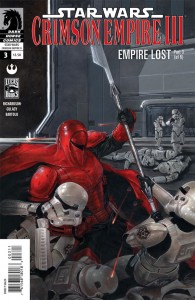 Kir Kanos strikes back at the Empire! Kidnapped and dragooned into a hard-liner Imperial plot, Kir Kanos, the last surviving member of Emperor Palpatine’s royal guard, has had enough! He goes to war with one Imperial faction, even as Leia Organa Solo receives an invitation to meet with emissaries from another.

Treachery layered on treachery is revealed and Kanos answers it the only way he knows how–with violence!