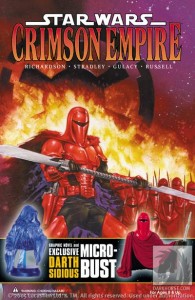 Dark Horse has teamed up with Gentle Giant Studios to bring you an exclusive Star Wars graphic novel and micro-bust package. Enclosed in the box is Dark Horse’s classic Star Wars tale, Crimson Empire, and 2 Gentle Giant bust-ups, including an exclusive blue holographic Darth Sidious figure. This figure will never be replicated and is only available in this highly limited package! The other bust-up is a gorgeous ruby red Royal Guard. Both bust-ups are between 2?-3? tall.

Crimson Empire is one of Dark Horse’s most popular Star Wars titles. In all the Empire, there are no more fearsome warriors than the Emperor’s Imperial Guard, and none is more loyal than Kir Kanos. But when Carnor Jax-the most formidable of this elite brotherhood-betrays the Emperor and orders the murder of the Guard, Kir must escape to carry out his duty to avenge his master.

This exclusive Crimson Empire package is only available to the Direct Market.