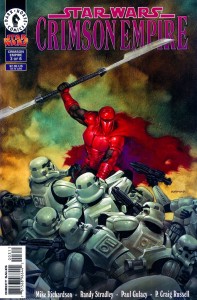 Mirith Sinn’s band of Rebels is under siege by the Empire as their hideout is discovered! But who should come to their rescue but . . . Kir Kanos, the last member of the Crimson Guard?! Is he on their side — or is there another reason he is fighting with them? This issue finally reveals just why the Empire is after Kanos — and why Kanos is after Carnor Jax, the Imperial who covets the Empire’s throne! Plus, at last, you’ll learn just what happened to the Crimson Guard after the death of the Emperor in Empire’s End!