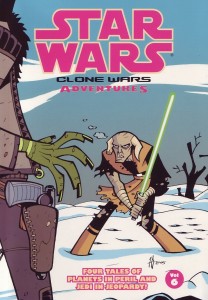 Four more thrilling tales of planets in peril and Jedi in jeopardy! The Clone Wars grind through the galaxy, shaking every system to its core and testing loyalties on both sides of the conflict. The last days of the Jedi are at hand, but if their Order is to fall, they’re going down swinging! Presenting another round of lightning-paced, action-packed, all-ages Star Wars goodness, all told in the same stripped-down stylization as Cartoon Network’s micro-series.