Legacy Volume 3: Claws of the Dragon 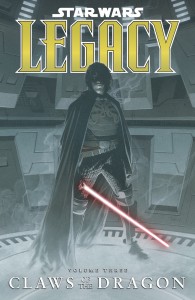 „Claws of the Dragon“–one hundred years after the events in Return of the Jedi, Luke’s descendant Cade Skywalker is captured by the Sith, Emperor Darth Krayt unveils his true identity, and a secret chapter in the life of Obi-Wan Kenobi is revealed. When Cade attempts to rescue the Jedi he turned over to the Sith during his days as a bounty hunter, the last Skywalker soon finds himself in the clutches of Darth Krayt. There, Cade must confront his past and decide once and for all: will he remain the Emperor’s prisoner or become his thrall? Learn whether the Skywalker line lives up to the triumph of Luke or returns to the tragedy of Anakin!