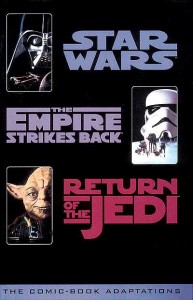 A long time ago in a galaxy far, far away . . . Those words began the first Star Wars movie in 1977, a movie that became a phenomenon the likes of which hasn’t been duplicated since! Now, almost twenty years later, the phenomenon continues. New generations discover the mythos, even as the next trilogy of Star Wars movies approaches.

For the completist, for the collector, for those who were there when it started: The Classic Star Wars boxed set. Thrill to the original adventures of Luke and Leia, Han and Chewbacca, and the faithful droids Artoo-Detoo and See-Threepio — and prepare yourself for the next installment of the greatest battle the galaxy has ever seen!