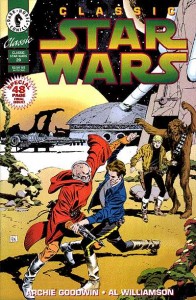 Developments in our favorite far-away galaxy a long time ago are winding their way rapidly to the point at which the events of the movie The Empire Strikes Back begin — with the Rebels engaged in battle with Empire forces on the ice planet Hoth. But before that, our Rebel heroes will have to face a regular rogues‘ gallery of Star Wars rapscallions and wretches — Darth Vader, Raskar, Skorr, and even that most nefarious of bounty hunters… Boba Fett! This wonderfully received reprint series comes to a climactic conclusion with a special 48-page issue featuring Al Williamson’s original newspaper strip art, new never-before-seen Al Williamson Star Wars art, and, of course, a brand new Al Williamson cover! Who could ask for more!