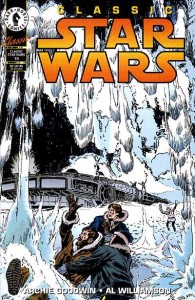 This series of reformatted and newly colored newspaper strip reprints is winding to a close. And lest anyone forget, Han Solo’s still got a bounty on his head — and there are plenty of opportunists who are dead-set on collecting. Han and the Rebels‘ recent adventures throughout the galaxy have not gone completely unnoticed by those interested in taking advantage of the easy money. In fairly short order, they meet up with an old foe who turns out to be a friend, and a couple of enemies — who will have a much greater role to play in Return of the Jedi. A series of adventures ultimately winds up with our heroes crash-landing on Hoth, searching for a treasure which may or may not exist. This penultimate issue is graced by a brilliant new cover by veteran comic-book artist George Evans.