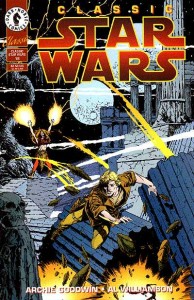 In the midst of a perilous Paradise Detour, Luke continues his hunt for the missing S’ybll, while being pursued by what appears to be his old foe, the Night Beast. Eventually, the mystery of the successive unexplained appearances of Tanith Shire, the Night Beast, and Ben Kenobi is solved… and as it turns out, S’ybll has some very sinister — and selfish — plans for the young Jedi. Needless to say, Luke escapes S’ybll’s clutches, after another Rebel rescue just in the nick of time. He, along with our other Rebel heroes, finally arrive at the new Rebel base on Hoth, ready for A New Beginning. They’re greeted there by a perturbed Princess Leia, who, before they can so much as look around, has another potentially dangerous mission for the unflappable Luke, Han, and Chewie.