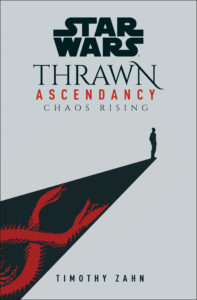 With the might of the Expansionary Fleet at his back, and the aid of his comrade Admiral Ar’alani, answers begin to fall into place. But as Thrawn’s first command probes deeper into the vast stretch of space his people call the Chaos, he realizes that the mission he has been given is not what it seems.

And the threat to the Ascendancy is only just beginning.