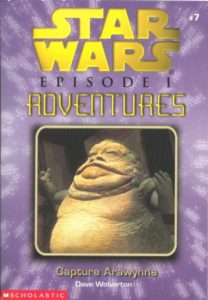 Jabba the Hutt is angry. Princess Arawynne and the rest of the Ghostling children are missing. They have been hidden, and Jabba wants them found…at any cost. He sends four of his most fearsome trackers into the pleasure garden of Gardulla the Hutt’s fortress in order to catch the slaves.

But Arawynne and her friends aren’t going to be captured without a fight!