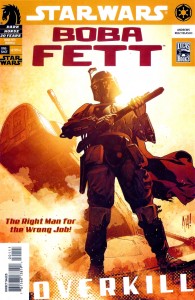 Boba Fett rockets onto the scene with blasters blazing in this stand-alone story featuring the galaxy’s greatest bounty hunter taking on a dangerous contract that proves deadly for all involved!

Summoned to settle the score between two warring factions, Fett quickly shows his employers the importance of always choosing the right tool for the job, and the folly of underestimating just how much damage and chaos a single Mandalorian can inflict. Once unleashed, Fett’s drive to finish the job is unshakable, and both groups quickly realize they’re dealing with a bigger and much deadlier mutual problem-one that must be stopped before it obliterates everything!