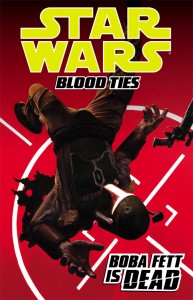 The news spreads from one end of the galaxy to the other like wildfire: Boba Fett, the galaxy’s most feared bounty hunter, is dead.

But members of the team that killed Fett are themselves being picked off one by one by a mysterious avenger, and Connor Freeman—the son of one of Jango Fett’s clones—gets drawn into the whodunit. Freeman is recruited against his will to find and safeguard a particular bounty hunter on a distant world with an unknown connection to Boba Fett . . . Collects Star Wars: Blood Ties—Boba Fett Is Dead #1–#4.