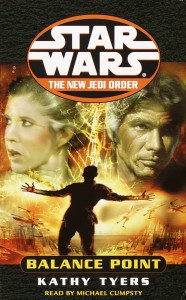 Vector Prime, the launch book of The New Jedi Order, was a New York Times hardcover bestseller for four weeks, with nearly 200,000 copies in print and 25,000 copies in audio.

Han Solo and Leia Organa Solo work to help refugees flooding in to the planet Duro from the Rim worlds. However the dreaded Yuuzhan Vong have chosen Duro as their next target. Jacen Solo, working at his father’s side, finds himself on the horns of a dilemma: how to reconcile using the Force as a tool for good, yet still fight the evil invaders. He must make the right choice, for the future of his family—and possibly of the New Republic itself—hangs in the balance…