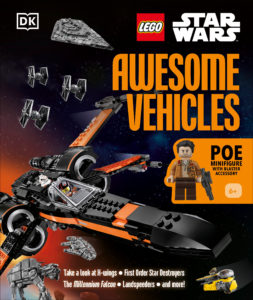 With X-wing pilot Poe as your guide, check out the most amazing brick-built vehicles in the LEGO® Star Wars™ galaxy!

Which vehicle in the LEGO® Star Wars™ galaxy is the one for you? Join Poe Dameron, the best X-wing pilot in the Resistance, and take a look at 25 out-of-this-world vehicles, from Poe’s zippy X-wing to the moon-sized Death Star. Take a peek inside an AT-AT and discover what it’s really like to drive the Millennium Falcon.

Get top tips from pilots, including Han Solo and Luke Skywalker. Check out driver reviews and find out what you need to know about taking the controls of a vehicle in the LEGO Star Wars galaxy. Let Poe show you each vehicle’s amazing features and then decide which one you would like to take out for a test drive!