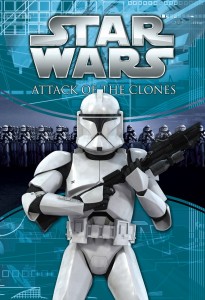 One of the most epic cinematic events of all time comes to comics in this manga-sized adaptation of Attack of the Clones using still frames from the film!

Ten years after The Phantom Menace, a faction of political separatists led by former Jedi Knight Count Dooku attempts to assassinate Senator Padmé Amidala. As Obi-Wan Kenobi and his apprentice Anakin Skywalker try to discover the identity of the assassin, they uncover an insidious plot to destroy the Republic.