Agent of the Empire: Iron Eclipse #4 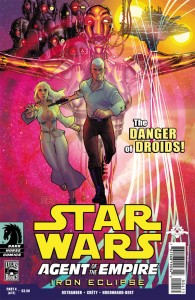 So far tonight, Jahan Cross has been “killed,” has entered into a “marriage” of convenience with the sister of his enemy, and has had a knock-down, drag-out fight with a murderous droid. Now he’s onboard the Millennium Falcon and headed for an obvious trap! All in a night’s work for an agent of the Empire!