Agent of the Empire: Hard Targets #5 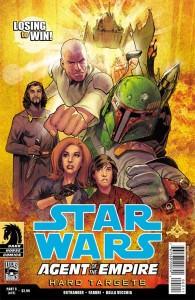 Everyone—including Boba Fett—is after the young Count Dooku. As Cross and the Count’s loyal security guard attempt to whisk the boy to safety, they are surrounded by enemies! In the past, Cross had the power and authority of the Empire behind him. Now he has nothing but his fists!