Agent of the Empire: Hard Targets #1 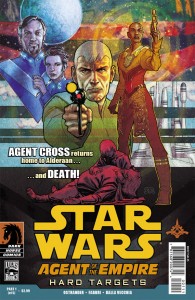 Jahan Cross returns to his homeworld of Alderaan for a celebration hosted by Bail Organa in honor of the current Count Dooku. But the situation turns deadly when an assassin kills the Count, and Cross finds himself working both sides of the intrigue!

Thus begins a new assignment for Cross—one that will tear at his loyalties, strain his friendships, and bring him into close contact with his own estranged father. All in a day’s work for Jahan Cross, Agent of the Empire!