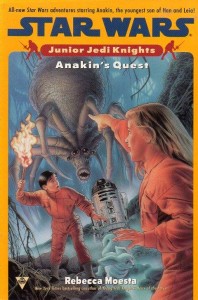 Anakin has been having terrible dreams of a secret cave on Dagobah. He asks his uncle Luke if he can go there, to see if it’s real. Luke says yes—but only if Tahiri, R2-D2 and the Jedi Master Ikrit go along.

Anakin and his friends find more danger than they bargained for in the swamps of Dagobah. But they do find the cave. What is inside? And will Anakin be strong enough in the Force to face it?