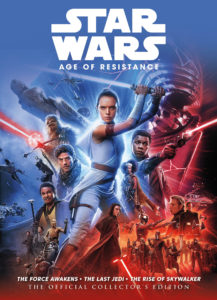 “Every Generation Has A Legend.” Five years after the release of Star Wars: The Force Awakens thrilled a new generation of fans, the Star Wars sequel trilogy has concluded with The Rise of Skywalker.

The Star Wars: The Age of Resistance Trilogy Special is the ultimate journey through the productions of The Force Awakens, The Last Jedi and The Rise of Skywalker. With exclusive interviews with the cast and crews that brought you the story of Rey, Finn and Poe and their struggle against Kylo Ren and the dark forces of the First Order to life, this is first book to chronicle to making of this beloved trilogy.

Featuring stunning photography and production art, this indispensible souvenir edition is essential for all fans of the Star Wars Saga.