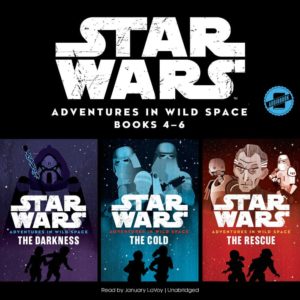 TWO KIDS TAKE ON THE EMPIRE

It is a time of darkness. With the end of the Clone Wars, and the destruction of the Jedi Order, the evil Emperor Palpatine rules the galaxy unopposed. When the parents of Milo and Lina Graf are abducted by agents of the evil Empire while the family is out on a mission mapping the unknown systems of Wild Space, the children must undertake a perilous journey to rescue them. In the fourth book of this six book chapter book series, Milo and Lina have been captured by the bounty hunter, the Shade. The Shade has orders to bring the children to Captain Korda. But on their way there, the power goes out on the ship. Will Milo and Lina be able to escape the Empire, or does something even deadlier await in the darkness?

Milo and Lina Graf have picked up the trail of their kidnapped parents-but an ambush in the depths of Wild Space leaves them stranded on a desolate ice planet. With an old enemy out for revenge, can they survive the cold?

Milo and Lina Graf, have located the mysterious Wild Space planet where their parents are being held by the evil Empire. They must infiltrate a secret base to free them. With an entire legion of Imperial troops to contend with, can the young explorers at last succeed in The Rescue?