A New Hope – The Special Edition 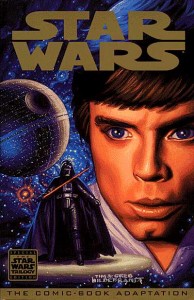 When George Lucas made the first Star Wars motion picture, a scene was shot wherein Han Solo met Jabba the Hutt. But as any Star Wars fan knows, Jabba didn’t appear until the third film, Return of the Jedi. Lucas had hit the technological wall — he couldn’t craft Jabba the way he wanted, so he simply removed the scene from his initial, ground-breaking movie. Now, two decades later, he has taken that footage — with a young Harrison Ford portraying a brash Han Solo — and added Jabba to it. The result is incredible. The hair will stand up on the back of your neck, and you’ll feel twenty years younger as you experience that remarkable thrill all over again. That’s the same feeling you’ll have as you read the all-new adaptation of Star Wars: A New Hope. Crafted completely from scratch by Bruce Jones, Eduardo Barreto, and longtime Star Wars artist Al Williamson, with a stunning cover by Greg and Tim Hildebrandt, this adaptation includes the new scenes from the Special Edition. For those who cannot wait for four monthly issues, and for the new readers who will surely come looking for this comic, we are publishing this simultaneously as a trade-paperback collection and as a four-issue, monthly comics series. Experience it again, for the very first time.