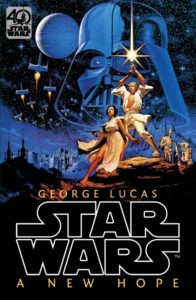 Luke Skywalker was a twenty-year-old who lived and worked on his uncle’s farm on the remote planet of Tatooine…and he was bored beyond belief. He yearned for adventures that would take him beyond the farthest galaxies. But he got much more than he bargained for….

Rediscover the classic adventure with this 40th Anniversary special edition, published for the first time in hardback with the original film artwork.