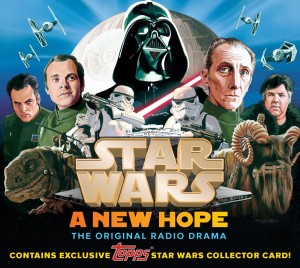 This collector’s MP3-CD edition of the Star Wars Original Radio Drama includes all 6 hours of the program as well as over 30 minutes of rare bonus audio—interviews, radio promos, and “The Making of Star Wars for Radio” documentary—plus an exclusive Topps Star Wars Illustrated trading card, “The Dark Side.”

When this series was first broadcast on National Public Radio in 1981, it generated the largest response in the network’s history: 50,000 letters and phone calls in a single week, an audience of 750,000 per episode, and a subsequent 40-percent jump in NPR listenership.

This landmark production, perhaps the most ambitious radio project ever attempted, began when Star Wars creator George Lucas donated the story rights to an NPR affiliate. Writer Brian Daley adapted the film’s highly visual script to the special demands and unique possibilities of radio, creating a more richly textured tale with greater emphasis on character development. Director John Madden guided a splendid cast—including Mark Hamill and Anthony Daniels, reprising their film roles as Luke Skywalker and the persnickety robot See Threepio—through an intense 10-day dialogue recording session. Then came months of painstaking work for virtuoso sound engineer Tom Voegeli, whose brilliant blending of the actors’ voices, the music, and hundreds of sound effects takes this intergalactic adventure into a realm of imagination that is beyond the reach of cinema.

(Includes the same content as the “Dark Side” edition except for the Topps card with corresponding cover art.)